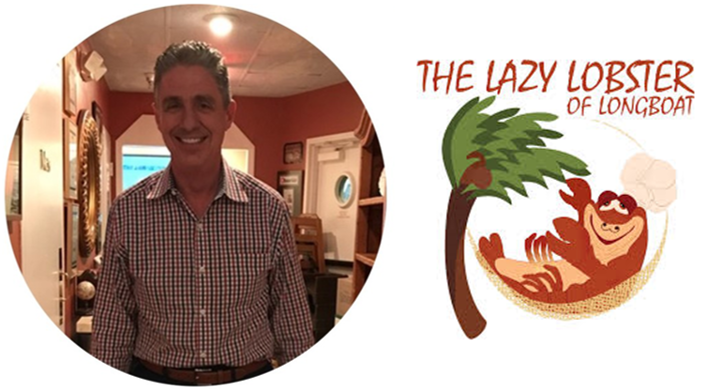 At the height of the recession, Michael Garey had a vision to bring the Lazy Lobster – which his current business partner Chef Bob Fracalossy owned since 2007 in Sarasota – to Longboat Key. In 2009, Michael’s business partner asked, “Who’s going to run this thing?” Michael, already knee deep in the wine sales business, was adamant. “I will!” “Everyone thought we were insane. The timing was crazy. But it took off right away!”

No stranger to the restaurant business, Michael’s resume includes tenures at Café L’Europe, The Colony Tennis & Beach Resort and Transatlantic Wines and Spirits. When asked what drew him into the business, he smiled and said, “My goal was to play as much golf as possible, the restaurant job was going to be a means to work nights and golf during the day.” But with over 40 years spent in the business, and raising three daughters, finding the 5 hours for a round of golf vanished a long time ago.

“Opening night was a comedy of errors! Our phones were down, we were completely booked, the buzz was already around town, and we had to transfer calls to one single cell phone. It was quite a behind- the-scenes event! Luckily, our amazing staff handled things flawlessly.”

The Lazy Lobster employs 44 staff, eight of whom have been at the restaurant since its inception. Chef Chris Reed, who makes a mean “Swordfish Delaney”, Michael’s favorite dish on the menu, has been the Chef for five years, explaining the renowned consistency of the cuisine. Staff consists of the front end (busser, server, bartender host), and the back end (dish crew, cooks, prep and chef). “Our staff is comprised of a diverse group of extremely dedicated individuals.” Garey said, “Our General Manager, Michelle Waldron, has worked her way up through just about every position in the restaurant during her eight years here”.

“We work cohesively as a team in that we follow the same mantra, ‘Happy Money’”. I feel that most restaurants fail because they knowingly or unknowingly take “unhappy money.” This means that the management and ownership either did not care that the guest was unhappy or that they did not ask if the guest was happy. “We don’t want any dollar that a guest didn’t want to give us! The most important thing I want my customer to remember about the Lazy Lobster, other than the food, is simple – Their business is appreciated.”

In 2019, Michael was the recipient of the Longboat Key Chamber’s “Small Business Person of the Year.” Located in the Centre Shops at 5350 Gulf of Mexico Drive, the Lazy has outdoor and indoor dining and a bar area, where Michael notes, “we are packed with regulars! Shout out to Courtney & Kasey for doing such great work behind the bar!”

Diners can enjoy casual seafood in a fine dining, comfortable atmosphere without the fine dining prices. The Lazy Lobster likes to have fun with their menu from time to time, like “Throwback Thursdays,” including dishes like liver and onions and other blasts from the past. National favorites are also observed, such as “National Clam Chowder Day” and “National Prosecco Day.” Lazy Lobster is also renown for its early dining and happy hour menus!

When Michael comes up for air, he and his wife Catherine, enjoy taking long nature walks and playing tennis. They are huge Tampa Bay Lightning fans and look forward to when they can return to the arena. The couple has three daughters, the youngest is a senior at University of Central Florida, their oldest is a graphic designer and their middle daughter recently welcomed Michael & Catherine’s first grandchild to the family in Michigan.